The shubunkin goldfish is sometimes referred to as “poor man’s koi” and in China the koi carp is often used to represent yin yang. I have drawn the body of the shubunkin goldfish fish to look like one half of the yin yang symbol (see panel). I then added the fins to suggest and give movement to the piece.
Firstly I took a photocopy of my artwork and stuck it to a sheet of 0.5 mm copper plate with double-sided tape. This is to create templates of the body and fins I had always wanted to build a grandfather clock case and was given the incentive when a client gave me the a modern clock mechanism and a photocopy of a reproduction of an English Tall Case clock to follow. I had to increase the plan dimensions to fit the mechanism, ash wood was chosen and I ended up with 23 metres of approximately 200 x 25mm rough-sawn at an average length of 2.4 metres costing just under $300.
This is not the ideal style of clock case for anything other than an antique clock mechanism. In modern clock mechanisms, the pendulum swing (which should always be tested) needs a straight-waisted trunk style of clock. However, this project has been done to the requirements. A mechanic turns to clocks

Ken England has been fixing clocks as a hobby in his Whakatane shed since the 90s.
Repairing a clock is not just a case of pulling it to bits, replacing parts then re-assembling, he tells me. “Everything works in sequence and has to be timed.”
He is a member of the New Zealand Horological Institute but was never a clockmaker by trade. What makes Ken “tick” and has given him the necessary clock-repair skills is the engineering know-how already in his background, a knowledge of how to machine parts, manufacture, and silver-solder. This classic ring is called a six-claw, Tiffany-style single-stone setting and is the simplest of our school’s solitaire-diamond ring designs with a claw setting. The “Tiffany” label comes from the famed American jewellery house which boasted that its diamonds were of such quality that they did not need to place them in fancy settings.
As a design for round gems, this is just about as basic as one can get. 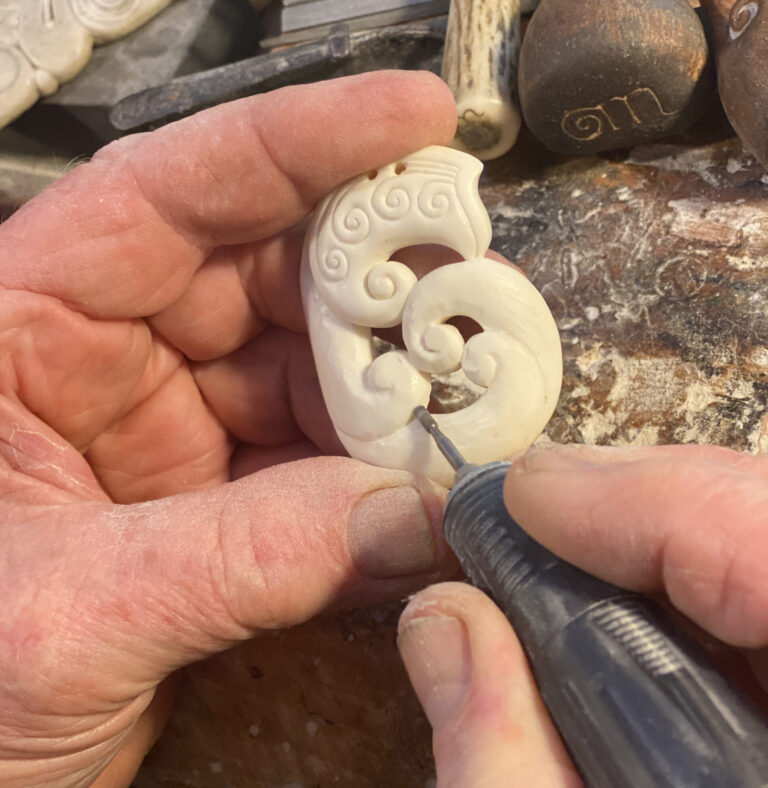 Learn bone carving from the master

When master bone carver Owen Mapp, CNZM, began carving bone and ivory in the 1960s there were no teachers and no bone carvings being sold commercially, so he had to learn just by doing it.
“I was the first one. There were a few jade carvers but nobody was interested in the materials then and I had the field to myself,” Owen says.
He has developed his practice and passion for the art form over 50-plus years, creating original works that are strongly influenced by Māori history, concepts and design; as well as Scandinavian, Asian, and Japanese netsuke designs, symbolism, and traditions. You might well think a charming silver pendant is something best left to a professional, a master craftsman – and not a DIY project for your shed. But that does not mean you can’t make an impressive piece of jewelry, so long as you take a logical and careful approach. The art of bone carving

When the meat lovers among us think about carving up Daisy the cow, we’re picturing the Sunday roast but Lilach Paul sees bare white bones: blank canvases to be brought to their full potential beneath her Dremel drill. The basics of engraving are not too difficult and can be mastered with perseverance. However, as with anything, it takes practice to achieve true dexterity and ability. There is nothing more beautiful, timeless, exacting or lasting than a craftsman’s engraving. The best way to begin is to give it a go. A matter of time

I purchased all the brass sheet and rounds required, plus a main-spring, brass bolts, and screws of the various sizes needed.
Now where to start on the clock?
I carefully read and followed the order and instructions of the book. If the instructions are not adhered to, many anxious moments and frustrations will follow. Most people have separate places for work, play, accommodation and their hobbies but Malcolm Anderson has successfully managed to combine them all into one.
Malcolm’s father, Bruce Anderson, has a passion for collecting and restoring motorbikes to the highest standard. One of his projects, a 1929 Harley-Davidson OHV Two-port Special that he restored from a pile of parts, now resides in the Harley-Davidson Museum in Milwaukee in America. A sheddie poem at Christmas Of the scores of varieties of willow commonly used in basket weaving, six grow on a 1000-square metre plot at the back of Mike Lilian and Annemarie Liesbeth’s house in the coastal settlement of Kakanui, 15 minutes drive south of Oamaru.
Mike has been making and selling willow baskets in dozens of styles since 1985. While you can make a knife sheath from any type of heavy leather, vegetable tanned leather, or russet as it is commonly known, will make the best sheath. Most leather for clothing and upholstery is chemically tanned by the chrome method whereas vegetable tanned leather is tanned with oak and various other species of tree barks that tanners have found to be suitable in producing good leathers.