Restoring a roller.. or three

What car maker would give every different bolt on a vehicle a different number and make sure every nut and bolt had a 3 percent chrome content? We’re talking about the same manufacturer that would put platinum on the faces of the distributor points so they would virtually last forever and “hang the cost”.

Yep, we’re talking Rolls-Royce and while their cars always mean the highest standards, their early cars were totally in a class of their own.

A devoted New Plymouth owner has embarked on a labour of love bringing three Rolls-Royces back to their former glory
Words: Ray Cleaver Photos: Rob Tucker

What car maker would give every different bolt on a vehicle a different number and make sure every nut and bolt had a 3 percent chrome content? We’re talking about the same manufacturer that would put platinum on the faces of the distributor points so they would virtually last forever and “hang the cost”. ‘

Yep, we’re talking Rolls-Royce and while their cars always mean the highest standards, their early cars were totally in a class of their own. Nyall Simkin of New Plymouth has restored three Rolls-Royce Silver Ghosts—a 1908 model, rescued from the Australian outback; a 1914 model, built for the Russian Tsar Nicholas II; and a 1920 Alpine Eagle speedster. These three “Rollers” are all convertible sports models and Nyall is, quite rightly, totally devoted to the trio. These big, long beasts with running boards and huge headlights shout class and the highest level of workmanship. The cars were from an era when the car company would manufacture the motor, running gear, chassis and bonnet and the buyer would find a carriagemaker to create the body. The Silver Ghosts are, of course, all silver. Originally named the 40/50 hp, there were 7874 ghosts made between 1906 and 1926. From 1925 the Phantom range was made.

The engines in all three cars are 7 to 7.5 litre, six-cylinder, at-head motors with a distributor and a magneto. Each cylinder has two spark plugs and these engines were high performance in their day. “They all rev up to 2500 rpm comfortably and tick over at 150 to 200 rpm,” says Nyall.

The Rolls each weigh in at 1.9 tonnes and Nyall and his wife, Joelene, say they are a joy to drive. There’s plenty of power available. Joelene even admits to getting a speeding ticket on one occasion: “Not many women drive big cars. I’m used to it. With five children we needed big vehicles and I find it fun to drive these old cars. You get used to double declutching and the lack of power steering.”

On the floor of the cars is a lever with a warning: “Not to be used in the UK.” This is for extra speed and diverts the exhaust from the muffler, creating a very noisy, straight-pipe system.
“A few hot rodders use this system to get more speed but Rolls-Royce was way ahead of the pack,” says Nyall with a grin.

The bodies of the cars were built and restored by master body-builder Steve Roberts of Whanganui. The bodies are aluminium with steel mudguards. The two earlier models are painted silver but the whole 1920s car is clad in polished aluminium, including the guards. It looks very impressive. The 1914 car has an original body.The three cars all have an interesting history. Rescued from the outback
The 1908 car is very rare. There are only ve left in the world today and this is the only one in New Zealand. It was the rst of the three to be restored and Nyall found it out the back of Brisbane in the 1980s.

The chassis and motor assembly was intact but a new gearbox had to be made using original plans from Rolls- Royce and pulling apart an old gearbox. “These old Rolls lasted so long they were popular as farm vehicles and were sometimes ripped apart to be used as trucks or tractors,” says Nyall with a shudder. “A lot of these old cars travelled over a million miles. They were made by hand before mass production of cars was even heard of.”

The headlights on this model were originally carbide lamps fed by an acetylene generator. Like the other two cars, the petrol is fed to the engine by pressurising the fuel tank. This was originally done via the exhaust gases, a rather dangerous innovation that was later changed to a pump on the gearbox.

“The pressurised fuel tanks actually make for smoother running than the fuel pumps that came out later,” says Nyall. In those early days cars often had names and there is a plaque on the rewall that reads “Nada Lily”, the title of a 1890s H. Rider Haggard novel. Despite a smaller inlet manifold than the other two cars, it was a racy car in its day. 1: The brass petrol switch 2: The big single nut to remove the spoked wheel

Murder and fire
The 1914 model was one of three built for the Russian Royal family in St Petersburg. The body was made by Rippon Brothers in Hudders eld, UK. It was owned by Prince Felix Yusupov, the husband of the Tsar’s niece, who was the man who shot Rasputin, the self- proclaimed holy man who held sway over the last Russian royal family.

It survived the Russian revolution, the murder of the Tsar and his family and ended up in the United States in the 1930s. Nyall said it was stored for many years and survived the big scrap metal drives during World War II after the attack on America at Pearl Harbour by being hidden three stories up in a building.

“There are still scratches on the sump where it was dragged up the stairs. We left them there as part of the car’s history.” The car then ended up in England where Nyall located it in the 1980s. It survived a ship fire in the Pacific on its voyage to New Zealand and eventually found its way to Nyall’s workshop.

“Now I’d love to drive this car across Russia and take it home,” says Nyall.

Major Murphy’s Roller
The 1920 model was built for a Major Murphy in the English army and it cost 2000 pounds when it was made. And that’s without the body. In the back is a cocktail cabinet made of elm burrwood. The car has three horns—a rubber bulb horn and two electric klaxons. 1: The elm burrwood drinks cabinet 2: The spark and mixture adjusted on the steering wheel

Special specs
The Silver Ghost at first had a new side-valve, six-cylinder, 7036 cc engine (7428 cc from 1910) with the cylinders cast in two units of three cylinders each, as opposed to the triple two- cylinder units on the earlier six. The seven-bearing crankshaft had full-pressure lubrication and the centre main bearing was made especially large to remove vibration, essentially splitting the engine into two three- cylinder units.

The earliest cars had used a trembler coil to produce the spark with a magneto as an optional extra which soon became standard—the instruction was to start the engine on the trembler/battery and then switch to magneto. Continuous development allowed power output to be increased from 48 bhp (3 kW) at 1,250 rpm to 80 bhp (60kW) at 2,250 rpm. Electric starting was fitted from 1919 along with electric lights. 1: The basic layout of controls on the 1908 model – no dashboard as we know it today 2: The exterior of the 1920 Alpine Speedster. Note the handbrake on the outside and no driver’s door. 3: The engine coil in its fancy wooden box below the steering wheel on the 1908 model.

The cars came out with oil and fuel pressure gauges. You operate a pump to pressurise the fuel tank and then the engine takes over. The oil pump runs at 20 psi.

Fan belts were made of leather. The big tyres are 23 inch (61 cm) and they run on huge inner and outer wheel bearings. A substantial tool box includes a spare engine valve and spring and a massive spanner to remove the big bolt that holds the wheels on.

“The modern Rolls-Royce cars are just ordinary vehicles but these early models were something special,” says Nyall. “I reckon the company lost their way after Royce burned himself out and died in 1933. He was an electrical engineer and quite a genius.

“Everything had to be perfect and money was no issue. Look at the leaf springs, for instance—each leaf is a different thickness. “The brakes are cable operated but run through a small gearbox on either side which equalises them and gives a lot more stopping power.” Brakes are only on the back wheels, but they have huge drums.

“The braking system is a crude form of ABS and they stop very well,” says Nyall. “There’s a servo system on the side of the gearbox and if one wheel locks up it releases it—it was way ahead of its time.” Nyall has a substantial workshop with a well-equipped machine shop with lathe, milling machine and all the gear needed for the restoration work. On the bonnet of the two later cars sits the famous Spirit of Ecstasy, the Rolls-Royce emblem that was introduced in 1911. 1: The lever on the floor to divert the exhaust from the muffler to give more speed if needed 2: Peter Pittwood with the big spanner used to remove the wheels of the cars

Showcasing Art Deco
The three cars took pride of place at the annual Tremains Art Deco Festival in Napier in February this year. A different make of car features every year and Rolls-Royce was this year’s choice. The Simkin family took all three Silver Ghosts over to lead the big parade in the festival as well as three 1920s cars from their collection—a 1929 Austin Special, a 1929 Graham-Page convertible and a 1923 Buick coupe. The 1908 Rolls led the way.

“One advantage of having five kids is that we have plenty of drivers,” says Joelene. The family have been attending the art deco festivals with their cars for 15 years. The Rolls-Royces are also used for special events such as weddings of friends and family and they show up at local car rallies. Nyall also has a 1951 Mark 6 Bentley and a 1930 Franklin Special roadster— but they are another story. 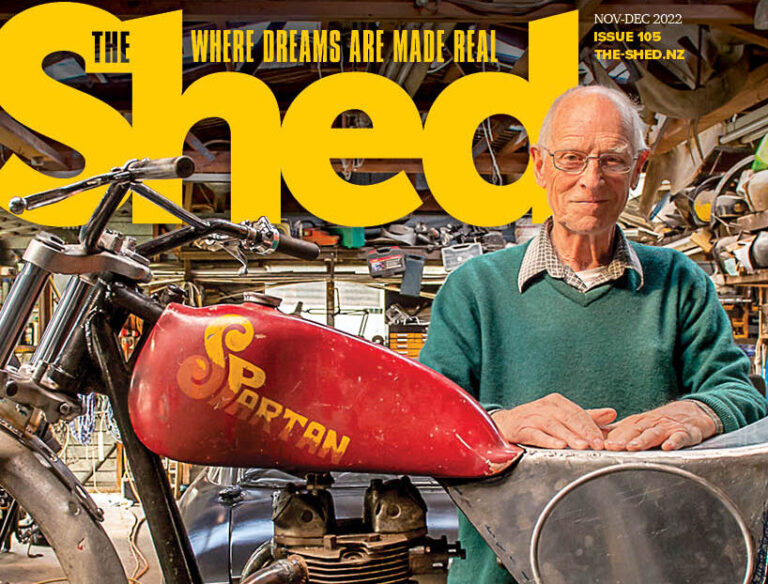 Legendary panel maker
The unassuming Steve Roberts has been called everything from artist and magician to guru of alloy; he himself is more comfortable with the handle ‘tin basher’
Our cover story this issue is on a legend of metal shaping and motorbikes, Steve Roberts. Steve is one of this country’s most respected and admired craftsmen in these fields, and we made the journey to Whanganui to catch up with him.
His output has been prodigious; his innovations groundbreaking; his production values and eye for detail next level. Incredibly, most of his work has been conjured, beaten, and bent with ‘basic tools’ — an indispensable 1920s lathe, a homebuilt press, and an ancient wheeling machine — from a modest shed he once shared with his family’s horses 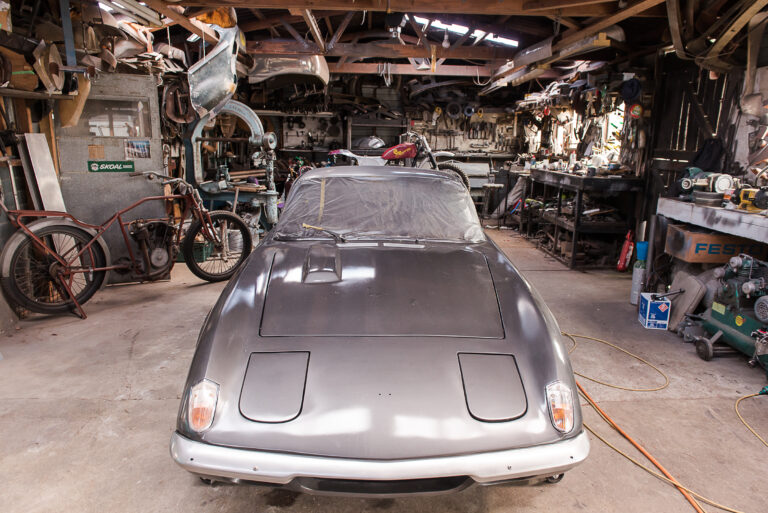 In the November/December issue 105 of The Shed, our cover story is on a Kiwi legend of metal shaping and motorbikes, Steve Roberts.
If you enjoyed that article here is a link to a website that has even more of Steve’s story as well as videos of the cars and bikes he has constructed and inside info from chats with Steve.